It’s pretty amazing when you’re really trying to focus on something being said, or a conversation, or something like that, and the next thing that you know,  is your mind is a million miles away.  How’d that happen?  I think it happens much more than we all think.  There was a conversation, or  something that just stuck in our minds, that means a whole lot to us, and we might not really understand why.

The second day after my surgery, September 25, I had to go in for not one, but two MRI’s.  They were both different;  one might explain where the mind goes when it is supposed to be very focused and timely.  The first is where you  just have to lie there, motionless, no movement at all.  It gets to be a long 30-40 minutes, but you can get through it.  As I tell them as I get on the bed and lie down, I’ve already gone somewhere else, so put me into the tunnel whenever you want, let’s get this over with.  It usually goes fast enough, just try to get a nap in by going somewhere else.  Then you not fighting “it”.  They know if you’re having trouble; they’ll speak to you if you need to have something.  Some even put music on;  if you go in tired, then that nap is easy.  Maybe because I’ve had enough of them, that now I know the rules to the game, at least MY game.  That way, I can control it, and get out of there in minimal time. 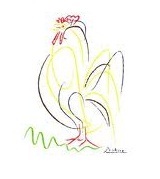 Then there is the MRI that I had never heard of before.  It’s also very interesting, and it does make time go on.  After you’re lying on the bed, they put a pair of goggles on you, and also a headset, and then you go into the tunnel.  What this is supposed to be doing, is not just taking a picture of your noggin, but reading what your brain is doing at that time.  A chicken is flashed across your goggles, and without actually saying any words, you think “chicken”.  You go through a whole series of that, and then the next part comes up.  The same thing happens, but now you also think out what a chicken does, what does it mean to you.  This goes on and on; and now is when you notice, some time notice that your direction is very removed from that chicken.  You wonder, how did that happen??  Then the part comes in where you are notified through the audio of, say, the chicken again.  Again, you start to think what you know about that, and once in a while, you realize that you’re nowhere near what you started.  With all this in mind, the time goes fast, and even though you’re in there for close to 60 minutes, it goes fast.

It makes you wonder how does the mind go about it’s thing?  I found myself thinking about how it got to where it was at.  I think that I reached the point of “0”.  It didn’t make sense, but again, that’s the beauty of all of this, it doesn’t have to.  Just go with it, and know that at some point, it all ties in; we might not follow the plan, but it does tie in.  Trust it though,  always, trust it.  Even though I think I’m not the only one varying from what I consider the truth, ( with my bit of a half-brain, maybe I am),  trust it, still.