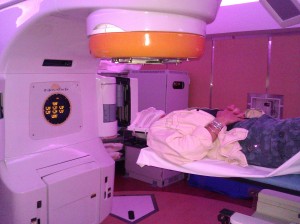 Who doesn’t want to take a nap, well, at least sometime?  I live for them, sometime only 20 -30 minutes.  Research tells us 15-20 minutes are the best, where we really don’t let ourselves drift into deep sleep, but that “down” time can sure bring us along in  a rested state.

This is what I thought when I was told that I had to have radiation.  I was thinking NAP time!  Not so much.  Before you even start to come into your “nap room”, you have to have a mask made up for your face.  You come to the table, and lie down so that your head is in a “cage” so to speak.  There will be 4 pieces made up, that all come together so that when they put it on prior to each treatment, you won’t be able to move your head a centimeter, let alone swallow.  The first thing they do, is make a piece for the back of your head out of a flexible mesh that is watered down and held onto your head until it dries and hardens.  Then it is time for your front area of your face; again with the softened mesh, until it dries.  Then 2 more pieces are fit on top of that front facial piece, to make it so that it really tightenes down so that there is NO way to move around.

All of this, I could still get around and get that nap in.  Once I lie down on the table, they put the mask on, I just close my eyes, and could easily go to sleep.  Maybe I do sometime, but 10 minutes later, my treatment is complete, done, no more; go on home!  A 10 minute nap doesn’t quite do what 30 does.  That good ol’ nap thing, not the same with only 10 minutes.  There is a up side to this, though.  You get to have your own lasor light show with all of the lasor work going on.  It happens to both sides of my head at different times, so there is no telling me that this is boring stuff!  They put music on, (I tell them loud), not too many of the people there really appreciate country though, can you believe that? They have several other styles and genres of music, so I’m good, I like everything in music. Sometimes a blanket has to be put over me, how could anyone wear anything but shorts during the day, anyway? 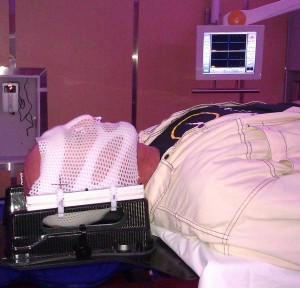 Great people who administer all of the correct protocol for you.  I don’t even have to check in at the front desk; I just head on back to the “second waiting area”, sit down and they come out and say let’s go, let’s get zapped.  Who wouldn’t want to do this?  Every week, every Monday, I also must get an appointment with one of the doctors, just to let them know how I am feeling, make sure that everything is feeling good, and that I don’t have any concerns.  Also, I am told that if I did have something that I needed an answer to now, just come in now, let’s talk about what concers you; in other words, they really want you to be comfortable, and secure in this process.  I have to tell you, pro’s, just pro’s.  When you’re getting your brain zapped, 30 times by the way, you really want to feel good and secure, and I do.  As I have said over and over about UCLA, they are the best, no other place to go.

The great thing about radiation, at least the radiation for what I’m doing, is there are really no restrictions.  Driving is fine, working out is fine, no special diet needs, although picking up a little more protein is a smart move, to help build back strength and support to damaged goods.  That’s another thing that they do here.  After the fifth or sixth treatment, I get another appointment, this time with a very smart and nice nurse, who gives me a notebook with literature about radition, diet, what one might have questions on, (well, for me, I didn’t worry too much about the hair losing thing!), just whatever might be in the half brain that I still have, again, making sure that I feel good about all of this, which I do.

Well, NAP time, so if anyone wants to take more pictures…..