O.k., so you go up to Tulelake (Tulelake is on the border of California and Oregon) to go after ducks/geese (LOTS of hope), and you come back home with only one duck; and still say it was one of the most fun that you had out of the all of the trips that you had in Tulelake.  Does this really make sense?  Somehow, it does.  Let’s start from the beginning.  Without stopping, except for the gas stops, is around 12 hours.  We left around 2:30, got there about 2:00.  I hate to say this, but it doesn’t seem like it took that a 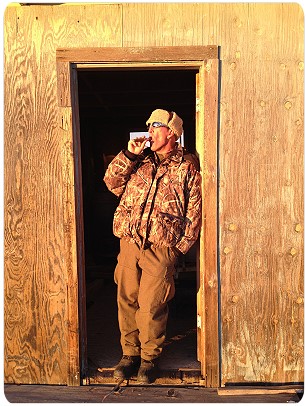 mount of time.  We slept around 3-31/2 hours, had some breakfast, and went up to the ridge and waited for some wings to fly by.  Right off the bat, Michael fired off two shots, and he got one, and I’m thinking, “This is going to be a great 3 days!”.  That’s it, done, that is all we got.  The next few days, the weather got a little warmer, even though the mornings were 18-20 degrees, that’s cold! It just got warmer, with no wind.  Not much flying (birds) by.

So here’s what came about.  Aside from the outside, the out-house was in the same spot where it was in before, the same place as before, and a shed, near the out-house, which has a furnace which is going to carry a great fire!  So that is what carries excitement!  When we get there to the ridge, we light the fire, and boy, it get’s hot!  The minute you walk in the shed, you get hot; so cold weather at 18-19 degrees never seemed so warm.  We did that three days in a row, that with a cigar.  What could be better?  So yes, one duck, but who could have more fun?  Sometime, the simple things starts to bring a happy feeling to ya! 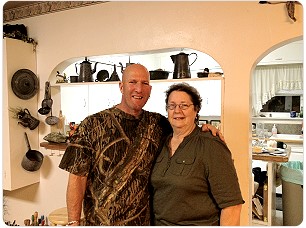 Two people run the Winema Lodge, Al and Verna.  Such nice, and fair people.  They came from another farm town, near Fresno.  Al just had BOTH knees replaced this year, which made Verna’s job like double duty.  Al coming back to work, slowly, but coming back.  They both said that this year was one of the best years that they started with.  The lady that cleans the birds, at a place called “The Mallard” (she’s been doing that for over 50 years), said the same thing, about this being a good year.  It’s strange, water being reduced at this particular area.  You never know, how it’s so busy earlier in the season, and no birds in the air this past week; and I still had a great week up at Winema Lodge!

Michael and I traveled the 3,000 acres that the lodge owns;  put that Hummer 2 in 4-wheel drive, and we make our own trail!  The trail itself was all rock, and we took our time; we had a great time.  We got to see  what we couldn’t see from the top of the ridge, a lot of fun.  We’ll get to see some pictures of where we were shooting, as soon as I figure out how to download them!  We got some great pictures; especially Michael.  His camera in his phone, can do a circular picture.  It’s really cool, especially in that weather!

A lot of people who haven’t been to Winema Lodge,  punch in the address, and end up about 7-8 miles away.  I don’t know how this happens, but later on, I’ll end up putting the lattitude/longitude up here, so those who are attracted to the Winema Lodge will definitely end up AT the Winema Lodge! 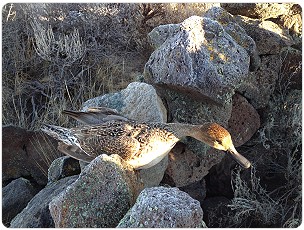 There’s a lot of what they call “caving”, hiking caves; over 600 of them in this area.  There is a natural Lava area, a bird sighting area; even though it’s a small town area, there is a LOT to do here.  Come up here, it really is a great area.  All of the rooms have a certain theme to them.  These rooms are LODGE rooms; 2,3,4,5 can fit in a room.  It’s cold, so a heater is put in the room.  You’ll get your own closet; even a table!  It’s just a comfortable, simple room.  All of your meals are cooked by Verna, dessert also.  You can bring your own wine, and your own Rum, Scotch, whatever.  The lodge has a pool table, a poker table, and a big T.V.  It’s just a great, “homey” place; I would recommed it to everyone.  Now mind you, we need to get out of the lodge at about 5:45; so Verna is up at whatever time it takes to fix our breakfast!  Should we say 5:00??  Let’s just say she works…hard.  They all do, Al works very hard to get his knees healed up.  Great people.

Everything was great on this trip; except the birds.  That’s the thing that we went up there for, but like I said before, I had a great trip.  Sometimes when you go for a reason, and that THING never happens, and you still have a great time, it’s called ENJOYING THE MOMENT! Again, as we talked before, isn’t that what life is all about?  It really is taking the time, and just taking it all in; so even if you don’t get what you came for, ENJOY!  You never know how many more will be coming up, so enjoy.  Life is short, make every day like it is your last day, some day it will be.  By the way, this is not a downer, it really is to enjoy your life; be HAPPY…….!