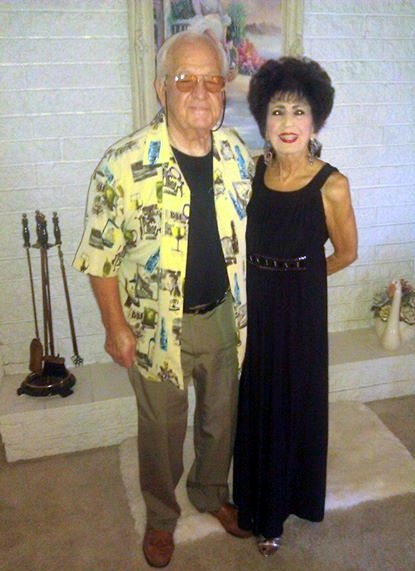 Isn’t that beautiful/  Turn Mom upside down and it’s it just one simple word, “WOW”.  Wow:  n. “an extraordinary success.  Also: excitement, interest, and great pleasure”.  This past weekend, we had a surprise party for my mother, who turned 80.  When I say surprise party, it was a week before her REAL birthday, (7/03), but my brother’s wife ( Ginna ) had her birthday on the June 28, and said she really wanted to have dinner with my Mom/Dad for her birthday.  Sooooo, as they were having dinner, we finished up the decorations for her party, and they came home< (7:30ish), and  SURPRISE!  It was great, because we had relatives in town for other reasons; BTW, “other reasons” is basically little “fibs” that we told Mom, and I think that she believed them.  I’ll try to tell the story about the other reasons:

My Dad’s sister, Rosemary, was in town.  Now I went back to Illinois 2 months ago to celebrate her 90th Birthday!  Now, her daughter, Mary and her husband, Jack, live in Portland, Oregon whose daughter Mattie graduated from college 2 weeks ago.  Aunt Rosemary, who is 90, didn’t want to fly alone, so Mattie went back to Illinois to get her to bring her out to Portland 2 weeks prior to her graduation, (ya with me?).  So Mary/Jack  35th anniversary was also that weekend (6/28), and they decided to go to Las Vegas and bring Aunt Rosemary, since Las Vegas is “right around the corner”.  Now, (oh my!) I have another cousin, Adam, who lives in Phoenix, Arizona.  His mom, Ellen, and Adam, flew up to Portland for Mattie graduation party, (stay with me), so they also came to the place “around the corner”.  My Mom knew that they (everyone mentioned here) were in Vegas, but the “other reasons” made her believe that.  We’re getting to the end, here, very soon.  The reason that my Mom believed that, was that the story was that Jack/Mary were taking their mom, (Aunt Rosemary) to an EARLY show, so that my Mom/Dad could go to dinner with my brother, and Ginna, his wife.  Then the SURPRISE.  WOW, (see), that’s hard to explain!

We, as a family, spent a lot of time eating, having drinks, and spilling out a LOT of memories.  So much fun, it’s hard to explain emotions.  Go to facebook and see a few pictures, and I have a great comment from one of my first clients, from 1986, who remarked how great my Mom looked.  I’ll tell you her secret: fitness!!!  Every morning, right when she wakes up, she does 30 minutes of stretching, and functional movements.  been doing it for years.  See the connection?  Exercise=great comments.  MOM=WOW!  Hand-in-hand!

I did spend a lot of time with my folks, and it was fun.  How blessed am I, again, to have both of my folks here, in good health?  My Dad’s other sister, (he has two sisters), is 87.  I guess it runs in the family!  I also think that there is a lot of things that we all take for granted as we go through this lovely journey of Life.  My family has always been number 1 in my life, but when I see my cousins that I hung out with when we were kids, up to high school, and college, I realize that this thing that we call time, is short.  So much, so many stories came out over the weekend, with a bunch of laughter that went with every story, made me think about enjoying THAT particular moment; when is the next moment like that going to come up?  Hopefully soon, hopefully very soon. What’s so funny, is that I don’t really know too much about everyone’s career, it’s just THEM that I’m interested in.  Bottom line; it’s just them, and I’m so gracious to feel that way, because we’re family.

The party was great; my brother put a LOT of work into it, and so did my sister did too,with a LOT of food!  For those of you that really don’t know me well, or any of my family; food is very important to us.  VERY IMPORTANT.  As I said earlier, we ate a lot; basically I wanted to get back to my simpler meals, but as you know, when it’s there…..

I would like to say how much that I love my mother.  She is such a wonderful, and inspiring woman, and has always been that way.  My upbringing was terrific, from what I can recall!  I’m sure there were times, but guess what, I can’t remember them!!  I found some words that tell about my Mom, and I’d like to share them;

Your mother is always with you.

She’s the whisper of the leaves as you walk down the street.

She the smell of certain foods that you remember, flowers you pick, the fragrance of life itself.

She’s the cool hand on your brow when you’re not feeling well.

She’s your breath in the air on a cold winter’s day.

She’s is the sound of the rain that lulls you to sleep, the color of a rainbow,  she is Christmas morning.

Your mother lives inside your laughter, she’s the place you came from, your first home, and she’s the map you follow with every step you take.

She’s your first love, your first friend, and sometimes your first enemy; but nothing on earth can separate you.     Not time, not space… not even death.