Father Figure: n.  a man who has or seems to have the qualities of an ideal male parent, inspiring in others the feelings, attitudes , and behavior of a child towards its father. 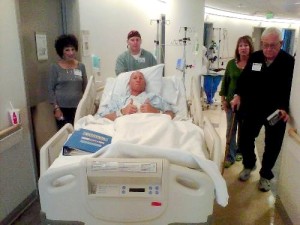 This is my father; whatever attitudes, feelings, thoughts, knowledge, wisdom that I have, would be that which my father suggested to me.  In sports, he gave me all that I know, due to his coaching, (aside from being a policeman, and ALWAYS a 2nd job), his “suggestions”, and I understood he might have a few, after being drafted by the New York Yankees as a pitcher, as his dad was, with the St. Louis Cardinals.  In my line of work, the love and support that he gave me, always humbled me, because I thought I “knew it all”, but I remembered where he came from, and how he raised all of us kids, and it made me think that I need to listen to someone who was my idol, my mentor, my dad.  My dad sometimes didn’t speak all the time, but I also found out how silence can be golden.  When I was in the hospital for my first operation in 2008, there was a lot that all of us, (family, friends, etc,,), didn’t know about my condition, and dad just sat by my bed and held my arm; silence is golden.  Once the doctors did know, he didn’t change his attention towards me, he just intensified it.  He was my protector, my strength; He will always be with me, strength and all.

For those that don’t know of my dad’s condition, he was fighting two different cancers, Lymphoma and Hodgkin’s Disease.  This was given to us as a family near the end of 2016.  I started going home to spend time with my family, especially mom and Dad, every 2 weeks, and then when these cancers started getting aggressive, I started going every week, and toward the end of his days here on earth, I would come home for a few days, work for 2-3 days, and go back to Vegas to help wherever I could; to help mom, to help dad’s caregiving, whatever was needed.  One might think that that’s a hard way to spend my time, but I wouldn’t have had it any other way.  Why would I?  He raised me, why can’t I do the same for him, after all he had given me?  He was my Dad. 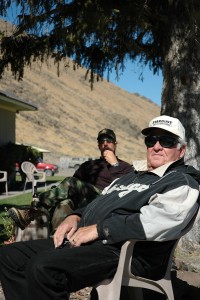 I would like to explain how he had passed, not for anything more, than to express his will, and fight to the end of his days here.  I was supposed to leave L.A, early Tuesday morning, after being home for 3 days, and I got a call from my brother Monday afternoon; he told me I should leave right now, in an hour, to see dad.  It’s funny, I had cancellations through the day, so I had nothing to reschedule, that was the first time in LONG time for that to happen.  After I had gotten to Vegas, I looked into dad’s liquor cabinet, (I always did that, to see if I might “borrow” a little!), and I saw this bottle of Cognac, (which is what dad always loved), but that bottle was never in that cabinet before, I definitely would have seen it, and by the way, it was a huge bottle, and it was never opened.  My brother had never seen it before.  We poured a snifter, took it into Dad’s room, (he had been bedridden for 2 days, with morphine at that time), put some Cognac on his lips, had a prayer of a Hail Mary, and Our Father, and he passed.  He saw his family, had a drink, a couple of prayers to ease him, and the Lord took him home.   So fitting of Dad, his family was everything to him.  As in Proverb 19:21; “many are the plans in a man’s heart, but it is the Lord’s purpose that prevails”.  Dad was content, and he went home. 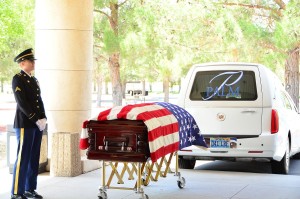 His funeral was his celebration of life.  It was exceptional.  Dad was a vet, he had gone to Korea in 1953.  One of Dad/Mom’s neighbors was also a vet, and when I told him about Dad’s passing the morning after, Bob (neighbor), was also a biker, and also to a group called Patriot Guard Riders.  This was a group of veteran riders, whose motto was: Duty-Honor-Country.  Bob asked if we would like the procession to be escorted by the VA bikers.  What a tribute, both to them, and us.  I lost count, maybe 40-50 riders, guiding the procession to the VA cemetery, cutting off drivers whom, these days, do not have the courtesy to pull over, and let honorability drive on.  Well, let me tell you, these guys were not having any of that!  They would pull in front of a car, slow down, and let the procession smoothly ride on it’s course.  The way that they honored their brother in arms, it was humbling.  They were, Brothers who served.  When we exited the church with the casket, the riders all had flags, and a line up that we had to pass through, what a chill.  When we got to the chapel at the VA cemetery, there was another line up that we, the pallbearers, had to go through for the audience.  There was a live Taps, not audio.  Then we had another line up at his burial site.  Another chilling moment, God had blessed dad that day; he deserved all of that.  We had cousins and friends from Illinois come out for their love, and respect for my dad.  As I said earlier, to my dad, family is, and always was, the most important to him; so to have all of our family to fly out for this, it is fitting for dad.  My brother is in the food business in Vegas, and he knows a LOT of casino chefs, and they put on a party after the burial, and no one wanted to leave.  Started at around 2:30, went until about 11:30, and no one WANTED to leave; pure love in our family.  The celebration was for the honor of Dad, but the unity of our family was beyond words.  I was blessed to be of this family. and I can’t thank my Dad enough for being a brother to his 2 sisters, a husband to my mother, an uncle to all of his nieces and nephews, a grandfather, and a great grandfather.  I have been blessed, Dad, and I will see you soon.  You’re  not over the Rainbow, you’re sitting ON the rainbow!  I love you, and I will miss you, you always were my strength, and will always, still, watch over all of us.